My wife recently won a contest held by the world’s largest publisher of romance novels, Mills & Boon. She is among three Indian writers chosen this year to write Indian romance novels for the global audience. Among other prizes, she will receive all Mills & Boon books published during an entire year, which adds up to a lot of books! She wanted to keep all her prize books and I immediately offered to build a new bookcase just for her Mills & Boon books.


Luckily I had several ready Teak planks which I had spent the summer planing and sanding. Materials clearly would not be a problem. To build the thing fast, I decided to use screws and dadoes to hold the shelves. I did not bother to draw out a design because the bookcase would be simple and its dimensions dictated by the available wood. All I needed to check were the inner height of the shelves which I put at 8 inches because the books themselves were all 6 ¾ inches. The lowest bookshelf was higher for other taller books. I set the width of the bookcase at 9 inches because I wanted an extra inch at the back for a wooden back and not a plywood panel.

Sizing the pieces of wood was a breeze because of my new table saw which ripped the pieces exactly to width and I did not have to bother trying to tweak them later on. The table saw I realised is a huge time saver and also adds much to the accuracy of the work. The dadoes were routed as usual with two planks of MDF as guides and a ball bearing guided mortising bit. The work was easy because I placed both the sides together and routed each dado in one go.

The shelves, top and bottom were screwed on into countersunk and counterbored holes which were later plugged with teak plugs. The carcass was thus ready and looked square and balanced. 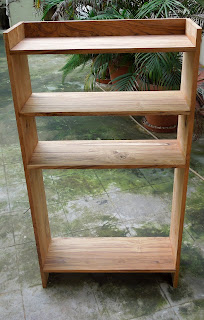 The small touches always take time. For instance, the backsplash (the strip of wood attached to the top back) was fixed by dowels which took time to mark and lay out but in the end did not match perfectly. I let this small imperfection go and fixed it later by planing the back. It looked fine from the front.

I also attached two stretchers at the bottom with two pocket holes on each side. This job was made easy, and possible I suppose, because of a Kreg Pocket Hole jig I had recently bought. Otherwise positioning pocket holes accurately can be quite difficult and tiresome.

Normally bookcases and cabinets these days have plywood backs, which are convenient to attach and can be slipped into a groove routed along the back edge. A project using good quality wood like Teak deserves better. The method of choice was to cover the back with strips of teak with shiplap joints. To make these joints on over two dozen strips, I had to build a simple router table which took a couple of days to figure out and put together (read about my homemade router table here). I made a zero clearance makeshift fence with a straight piece of rubber wood. To make the recess for the router bit I simply pivoted to fence into the bit. Then it was a matter of setting the height and depth of cut to exactly 3/16 inch each. After that it was a simple run with all the strips getting a rebate on opposite sides.

Each strip was screwed on to the back edge of the sides, top and bottom where I had cut ½ inch rebates. Each strip overlaps the previous and thus holds in down the first and last strips do not have rebates on the joining end and are screwed on into the sides as well. The result is a tight, dust proof back that has enough room (one card space between each rebate line) to expand and contract with the seasons.

My choice of finish for this project was Shellac. I had procured a couple of kilos of the finest quality de-waxed shellac from Calcutta which happens to the world’s biggest market for shellac. The shellac was (and is) occupying a lot of shelf space in our fridge and this was just the opportunity to prove to my wife that the shellac was worth it. After the usual round of sanding, I laid on thin coats of shellac, sanding in between coats with 600 grit sandpaper. The last coat of Shellac was applied using the French Polish method with a rubber. After about four coats have been laid on with brush or wiped on with a piece of cotton rag and sanded in between, the wood surface gets an even layer of shellac coating and feels smooth to the touch. French polishing at this stage is easier because the wood pores and surface imperfections are already filled and do not take up shellac. After a couple of days of slow polishing the grain of the wood began to stand out. That is the moment one realises the beauty of natural wood, unstained by any tint or colour.

The bookcase was ready just two days after my wife’s birthday and she of course was delighted. It now sits proudly in our bedroom with one empty shelf waiting for more books.

Thanks for your message.

Plywood surfaces are usually not very attractive on their own unless they have been veneered. Attaching veneer or buying pre-veneered plywood or board is often not appropriate for many projects, especially the more functional ones for the kitchen, bathroom or garage storage.

A straight paint job is often the only finish required. The results can be quite pleasing if some amount of care is taken.

I often get questions about painting plywood, which is understandable because painted plywood can look terrible if not done properly.

I prefer to use the non-glossy paints called "satin" paints. These paints do not shine or look like plastic emulsion. They give a smooth, silky look. Dulux and a number of other companies makes these paints and you can choose from many different shades.

The stages to a very decent if not excellent finish are as follows:

1. Light sanding. No abrading, just rubbing gently to remove burrs, loose bits and so on.

There are a huge variety of fasteners for different jobs. It is a big job deciding on the right kind of fastener or screw and then finding it. Here is a pictorial guide I found on the internet [http://justpaste.it/7ux]. Looks pretty useful.

The website of D. Lawless Hardware, an American company, provides a lot of information on screws in general. I have extracted some information from there website.

Basic Types of Wood Screws
Wood screws are classified by the type of drive, the shape of head, its length, and whether it is designed for wood or metal; this page refers to wood screws only.

Types of Drives
Drive refers to the indented shape on the screw head used to turn the screw. There are many different types of drives. Here we are only covering the four most used drives. These include slotted (flathead), phillips (crosshead), square, and pozidriv. A brief description of each drive is below with a picture at the bottom to illustrate each ones unique design.

W hen I first began woodworking a few years ago, what confused me the most was the huge variety of finishes available, starting from French Polish to Polyurethane, varnish and what have you. It was a bewildering range and I did not quite know where to start. Rather than doing a lot of research, I simplified matters by visiting my local paint shop to find out what was available and what was not. Fortunately I chanced upon a fairly well stocked paint shop in Noida which employed a helpful sales boy, who happened to be a Bengali from Calcutta. As I asked questions, he chattered away helpfully in Bengali and carefully explained a few basics.
I learnt that almost 90 per cent of the finish used in India is shellac based. Shellac or laakdana comes from the sticky secretion of a tiny insect (called Lacifer Iacca) and is harvested from forests in eastern India and Thailand. These secretions are collected and processed into usable shellac of which there are various kinds (see photo below). The ty…