Banerjies: The Joy of Making 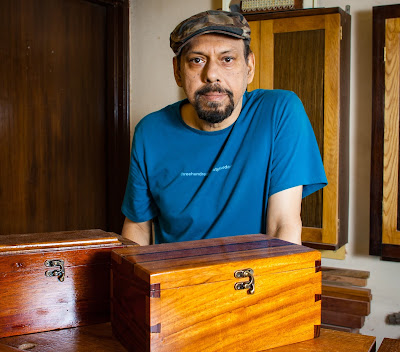 During the height of the pandemic's second wave, it was not uncommon to receive calls from distraught friends and acquaintances complaining they were going out of their minds sitting cooped up at home all the time. "I can't take it anymore", was a common refrain. While I commiserated, even sympathised, deep down I felt it need not be that way. For, humans can adapt to the worst of situations and even Anne Frank locked in her claustrophobic annexe could think of something inspiring to do. For us, it was so much better. For me, it was woodworking. I had taken to woodworking some ten years ago, driven by a childhood desire to create things with my own hands. By then the Internet and online ordering had arrived and for the first time an average Indian like myself could learn and practice woodworking. I also blessed by the opportunity to see first-hand some of the masterpieces of woodworking in New York, Philadelphia, Washington, Moscow and London, and I knew this was what I wanted to do. 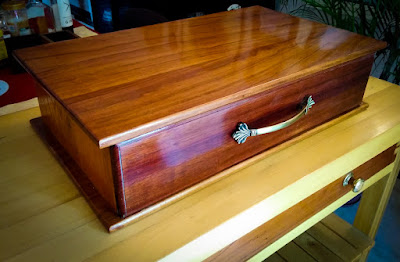 CUTLERY BOX: THE WOOD MAKES ALL THE DIFFERENCE
A craft or art when it becomes an obsession draws you into its folds, the rest of the world recedes and you realise you won't be bored ever again. So, when the pandemic forced us indoors and inwards, it was almost welcome. That was the time when I decided to take my work one step forward: begin to sell it. Over the years I had made many pieces of furniture, boxes and clocks - sold some, gifted many and stuffed our home with what I couldn't part with. But now the growing output of my work needed release and so a small business was born: www.banerjies.in. This is a micro enterprise - more of an artisanal venture than a proper business. I take time and care to make everything on my own which means output cannot be great. The idea is not to produce in bulk like a factory of a furniture workshop, rather the aim is to make each piece unique, more like art than manufacture. I think of my workshop as an artisan's studio. I look upon myself as a craftsman, not a businessman. 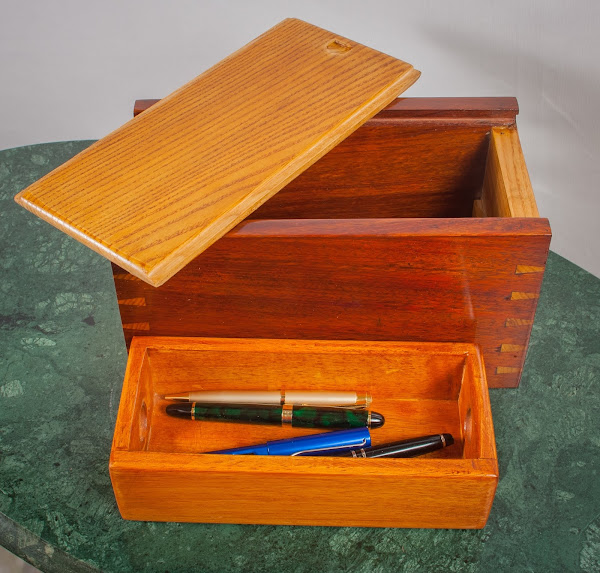 PEN BOX WITH TRAY MADE FROM PADAUK WOOD AND WHITE ASH
The biggest challenge was marketing. Fortunately for people like myself, the social media offers a modicum of opportunities and it is there I turned with the help of my wife, who is much savvier about these matters. Then came the website which I designed and deployed myself. I also invested in studio lights, stands and other paraphernalia for taking good product pictures. All this helped in getting the word across and I began to get orders from the beginning of this year. I was most pleased to find I got orders from places as unexpected as Poland and the United States. Selling is only one part of the enterprise; the principal part is the making. That is the inspiration, the raison d'etre as well as the ultimate objective. 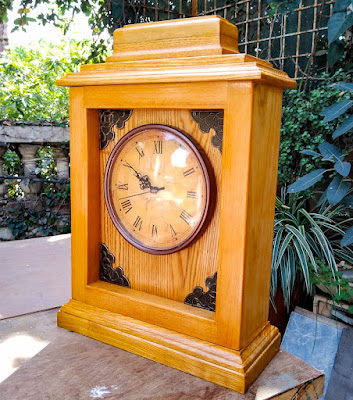 A CLOCK IN THE 19TH CENTURY STYLE
Wood has its own secrets and mystique as well as the propensity to inspire people to shape it into something, transform it into a work of art or utility. I, like millions of others, have been drawn to the beauty of wood and learnt to understand some of its qualities, its variations, behaviour and so on. I have been sharing some of my experiences and lessons learnt in my woodworking blog at www.indiandiy.blogspot.com which attracts thousands of views each month. I also learnt that design is the other most important part of woodworking, which is quite apart from the use of tools and techniques employed in the craft. I had two main sources of design inspiration: one came from the 18th century cabinetmakers of England and the United States. That was the golden age of furniture design and the works produced then are incomparable even today. The second source of inspiration came from the works of Indian artisans in olden times, who painstaking created objects of great beauty and style. Both these influences have shaped my aesthetic and I feel I am still learning. 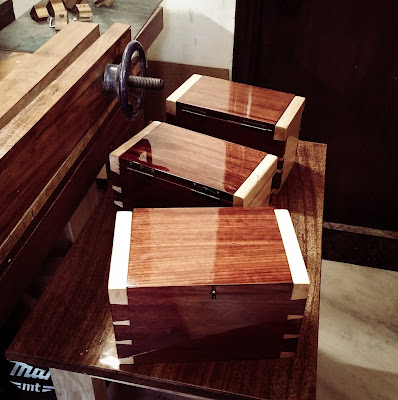 PEN BOXES BASED ON A DESIGN FOUND IN RAJMAHAL

As a craftsman I feel there is a huge amount one can take from the past and adapt all that to create exquisite objects. For instance, my box and clock designs are based on objects that were crafted by Indian and European cabinetmakers based in Calcutta in the 19th century as well as by artisans in small places such as Bengal's ancient capital Rajmahal, Vizag in the Andhra and so on. I wish in my own small way to preserve some of the long-forgotten traditions; I believe that all great art and craft stand on the shoulders of previous arts and crafts traditions. Without traditions, we are after all like the fiddler on the roof.

There are a huge variety of fasteners for different jobs. It is a big job deciding on the right kind of fastener or screw and then finding it. Here is a pictorial guide I found on the internet [http://justpaste.it/7ux]. Looks pretty useful.  The website of D. Lawless Hardware, an American company, provides a lot of information on screws in general. I have extracted some information from there website. Basic Types of Wood Screws Wood screws are classified by the type of drive, the shape of head, its length, and whether it is designed for wood or metal; this page refers to wood screws only. Types of Drives Drive refers to the indented shape on the screw head used to turn the screw. There are many different types of drives. Here we are only covering the four most used drives. These include slotted (flathead), phillips (crosshead), square, and pozidriv. A brief description of each drive is below with a picture at the bottom to illustrate each ones unique design. SLO

Plywood surfaces are usually not very attractive on their own unless they have been veneered. Attaching veneer or buying pre-veneered plywood or board is often not appropriate for many projects, especially the more functional ones for the kitchen, bathroom or garage storage. A straight paint job is often the only finish required. The results can be quite pleasing if some amount of care is taken. I often get questions about painting plywood, which is understandable because painted plywood can look terrible if not done properly. I prefer to use the non-glossy paints called "satin" paints. These paints do not shine or look like plastic emulsion. They give a smooth, silky look. Dulux and a number of other companies makes these paints and you can choose from many different shades. The stages to a very decent if not excellent finish are as follows: 1. Light sanding. No abrading, just rubbing gently to remove burrs, loose bits and so on. First Coat of Primer Applie

Of Pens and Other Collections

A few months ago, I rediscovered an old fountain pen, a long-forgotten companion from my college days. It was a cheap Parker with a plastic body, hidden in the midst of a drawer full of odds and ends. I resurrected the pen, washed it and filled it with ink and Voila! It was as good as the day I had laid it aside. It raced across the paper; its old nib abraded to perfection for my writing style. As I wrote, memories flooded back: College Street in the late Seventies, copying notes in the portico, long hours in the library of the economics department and hurriedly penned personal notes. Everything returned with a haunting intensity, unleashed by the opening of my old fountain pen. I wondered why I had discarded this and a couple of other fountain pens used eons ago. The pens and a couple of bottles of ink had survived the decades despite being abandoned. The computer and cheap gel pens had rendered the fountain pens redundant. But once I started writing with the old Parker, I realize